The now famous Rolling Stone magazine article in 2009 by Matt Taibbi unforgettably referred to Goldman Sachs, the world’s most powerful investment bank, as a “great vampire squid wrapped around the face of humanity, relentlessly jamming its blood funnel into anything that smells like money.”…

What if Ralph Nader and Ron Paul both got fair and just coverage? What if the subscriber supported alternative media covered them both, and their importance and influence were as great as #BigMedia?
What if their opinions mattered to you and your safety?
Would you listed? Would you act?
Find a cause that suits you and advocate for positive change. 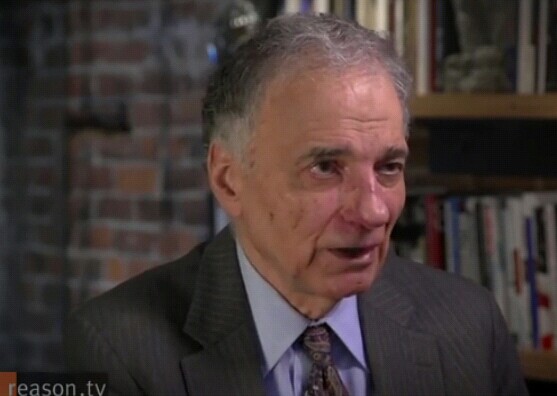 Wolfgang Schäuble, the German finance minister and a champion of austerity in Greece and other countries, said in an interview with the German newspaper Bild on Saturday that any Greek government would have to honor existing agreements.

“New elections won’t change anything about Greece’s debt,” he said.

Like the British fools of another century, we are distracted by a hopeless fight for democracy in Afghanistan while we ignore the real threat to democracy from Germany.

Indeed, Americans and it’s government are distracted by everything while truly reforming nothing.  Let’s not forget that the whole Greek crisis starts with Goldman Sachs and the yen carry trade, followed by the global financial crisis of 2008, after foreign banks sold the Greek treasury (run by a former Goldman Sachs executive) AAA rated toxic assets from the US sub prime housing market.  In other words, Greece has been hoodwinked by the banksters, and now Germany is trying to hold them accountable for repayment.

Like Michael C. Ruppert used to say, “Until you change the way money works, you change nothing.”

Greece Heading to Early Elections After Presidential Vote Fails
The result paves the way for early elections in which a party that opposes the terms of the country’s international bailouts is expected to win.

So Who IS Ashton Carter?
He was deputy secretary of defense from October 2011 to December 2013, serving as the DOD’s chief operating officer overseeing more than $600 billion per year and 2.4 million civilian and military personnel, and managing global 24/7 operations. From April 2009 to October 2011, he was undersecretary of defense for acquisition, technology and logistics with responsibility for procurement of all technology, systems, services, and supplies, bases and infrastructure, energy and environment, and more than $50 billion annually in R&D.

Previously, Carter was a senior partner of Global Technology Partners focused on advising investment firms in technology and defense.

He has been a consultant to Goldman Sachs and Mitretek Systems on international affairs and technology matters, and speaks frequently to business and policy audiences. Carter was also a member of the Aspen Strategy Group, the Council on Foreign Relations, the American Physical Society, the International Institute for Strategic Studies, and the National Committee on U.S.-China Relations. Carter was elected a Fellow of the American Academy of Arts and Sciences.
Carter was also co-director of the Preventive Defense Project, which designs and promotes security policies aimed at preventing the emergence of major new threats to the United States.
From 1990 to 1993, Carter was director of the Center for Science and International Affairs at Harvard University’s John F. Kennedy School of Government, and Chairman of the Editorial Board of International Security. Previously, he held positions at the Massachusetts Institute of Technology, the Congressional Office of Technology Assessment, and Rockefeller University. (See David Rockefeller – Predatory Globalist)

He was a physics instructor at Oxford, a postdoctoral fellow at Rockefeller University and MIT, and an experimental research associate at Brookhaven and Fermilab National Laboratories.
Carter served as Assistant Secretary of Defense for International Security Policy during President Clinton’s first term.

Carter noted that China was a central economic partner and that ‘The Shift to Asia’ is principally an economic matter with new security implications. India, Australia, and New Zealand were mentioned as forthcoming security partners (AKA the TPP Agreement currently on the “fast track” for the Obama Admin. See: Obama’s TPP Negotiators Get Big Bonuses From Wall Street)
(DARPA) Carter had been a longtime member of the Defense Science Board and the Defense Policy Board, the principal advisory bodies to the Secretary of Defense. During the Bush administration, he was also a member of Secretary of State Condoleezza Rice‘s International Security Advisory Board
Carter’s views on Iran have been perceived as hawkish. In 2006, he authored a report advocating use or threat of force to prevent Iran from obtaining nuclear weapons for the Carnegie Endowment for International Peace. (Exposed by the Reese commission as an endowment for WAR)

Carter is certainly a man from Wall Street, and a long standing member of the Global Govt round tables. He shares a high level tech background with the recent Obama Nominee for AG, Loretta Lynch. (Also from Wall St. as well as the NY Federal Reserve. MORE on Ms Lynch HERE)
There seems to be a major preparation ongoing for some kind of Cyber War. This war to be blamed on set up enemies such as “ISIS”, Syria, and North Korea etc… Would be impossible to prove to the American Citizenry. We would have to “trust” the powers that be, that whatever occurred went down per the official story. The I – Patriot Act has already been written.
Ashton Carter has been up for nomination for past duties in the US Central Govt…. He has passed unanimously each time.

First watch this “joke” from The Onion.  Then watch a serious video put together by a very intelligent young man.  It raises more serious questions about the high tech industry.

If I was running an oil company, I would want to make you desire my product as much as possible.  its a limited resource globally, the price can only go up.  It’s like squeezing blood from a turnip.

(Buy oil stocks. Make their price go up so high that it bursts.  So that every American starts to feel the pain so they will wake up and realize that we are under attack, in a war, and our monetary and foreign policy have been hijacked by foreign cartels.  We are so blind to the truth because no one in the mass media will come out and say it.  Why? Because the 5 major media companies in the US are owned in part by the same banker cartels that    caused the crisis, got the bailouts, and are now laughing their ass off while we plunder into oblivion.  If we let it go any further this will look much worse than World War II.  This will generate riots greater and more fierce than after the Vietnam War.  This will drive us further into debt until we are broke.  And the last time a superpower went broke it was 1989.  tianemen square, velvet revolution, fall of the berlin wall, romania, hungary, Panama, all fell to the American Empire that our presidential military industrial complex is running.  Eisenhower warned of the Congressional military industrial complex but the president can assassinate with drones.  He is showing off to the Pentagon with his CIA, covert, secret operations.  Meanwhile our own military is telling us to GET OUT of the middle east but they cant make the decision.  Only the president can.  And we are in the middle east to protect Saudi Arabia and the banking cartels oil investment with Saudi Aramco.  Was it on their behalf that we invaded Iraq? Or wa that just to provoke Iran into war? Wil the Iran war be a distraction from further financial rape here at home? Last time there was a war, Dick Cheney made $1.2 trillion dollars disappear from the Pentagon.

Then Hank Paulson and his Federal Reserve loaned domestic and international banks $26 trillion dollars.  Much of which is now held at the central banks all around the world.  As soon as they release that money to the market, it will be another boom.

And who got the MF Global customer money when they went bankrupt?  JP Morgan.  Who pays the attorneys that run the trustee and bankruptcy proceedings.  And who losses? Minnesota Farmers? Jon Corzine, former governor and former head of Goldman Sachs knows EXACTLY how to steal and get away with it.

The same people that own Shell Oil stock. Don’t you see? They have rigged our laws, our courts, our congress, our elections, our banking, our monetary and foreign policy.  We have been occupied!

Our government and economy are being controlled by a small group of very savvy psychopaths that know how to make money betting on both sides of every battle.

Every time somebody comes out with the truth, they get ignored by the mass media.  Which then makes it conspiracy theory, until knowledge of the truth crosses the chasm and reaches the tipping point of revolution.

We must convince Democrats, Republicans, and Independents to work together to take control of our country, or we will end up like Greece – a victim of financial rape.  We should hope we can turn out like India and keep control of our money supply and defend our borders and reach enlightenment.  Otherwise, we are likely to suffer much more than we already have.  We may end up like Russia in 1914 or Libya in 2011 or Iraq in 2003, Syria in 2012, .   Can’t you see the world is already at war.  this is the beginning of world war 3 and if we are not careful we could all end up dust in the wind.

When news of Goldmanesque bonuses first sparked public outrage, both Wall Street and the White House combated the criticism with a persistent argument: Yes, it might be deeply frustrating to see taxpayer dollars used to further enrich already wealthy bankers, but these bonus deals were were contractual obligations and America is a nation of laws. You just can’t tear up contracts, the argument went. So, with few exceptions, the bonuses stayed.

Yet now, with state leaders planning pay cuts for teachers, firefighters and other public workers, contracts aren’t described as so sacrosanct anymore…

Why are Goldman compensation contracts sacrosanct when pension plans and collective bargaining rights for teachers are not??