The Council on foreign Relations has been choosing our federal government bureaucrats since it’s founding by JP Morgan in 1921.  Do you really think this time is any different? The Trump campaign just signed up Sarah Palin as the running mate for Vice Presidential nominee….

Every time I listen to NPR I feel like I am getting a dose of Big Brother propaganda right out of a scene from 1984.  You can imagine the news feed coming in from Reuters and AP and then being filtered through the senior editors…

This is crucially important for Americans to realize this election season! 45% of Americans identify as INDEPENDENT VOTERS! And yet we have NO representation in the media.  There are independent candidates but many fold because they get ZERO COVERAGE!

All mainstream media outlets are OWNED by 5 major corporations that benefit from the left right divide and from endless war.  If we are going to restore America we MUST get our voices heard! 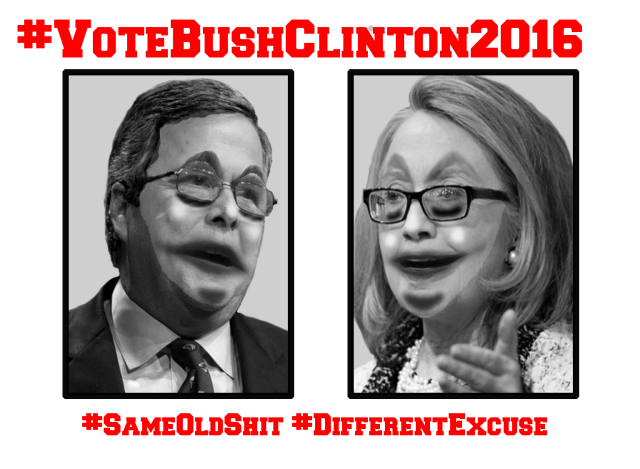 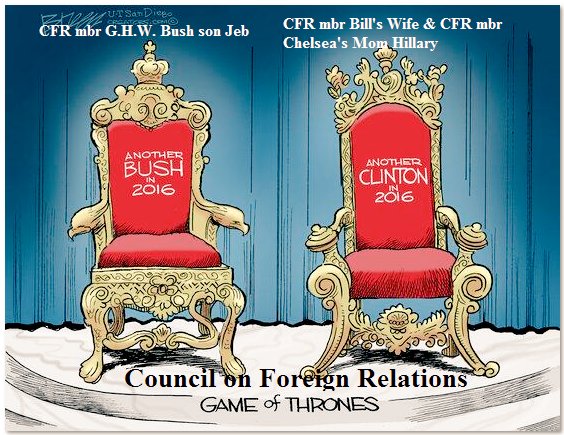 The left right paradigm is a false dichotomy perpetuated by political elite to divide the masses.  Meanwhile, nearly all high level appointees of the US government come from the same think tank, meaning they are share the same ideas, positions, and intel.

The Council on Foreign Relations (#CFR) is absolutely a cesspool of fascist pigs influencing policy and handing out sweetheart deals to their membership.

It’s time to have an indictment.  It’s time to have a grand jury hear the evidence.  The crime is TREASON.  We can start with the Benghazi affair or go straight to a 9/11 investigation that looks at the alliances and the networks of people in power.

So Who IS Ashton Carter?
He was deputy secretary of defense from October 2011 to December 2013, serving as the DOD’s chief operating officer overseeing more than $600 billion per year and 2.4 million civilian and military personnel, and managing global 24/7 operations. From April 2009 to October 2011, he was undersecretary of defense for acquisition, technology and logistics with responsibility for procurement of all technology, systems, services, and supplies, bases and infrastructure, energy and environment, and more than $50 billion annually in R&D.

Previously, Carter was a senior partner of Global Technology Partners focused on advising investment firms in technology and defense.

He has been a consultant to Goldman Sachs and Mitretek Systems on international affairs and technology matters, and speaks frequently to business and policy audiences. Carter was also a member of the Aspen Strategy Group, the Council on Foreign Relations, the American Physical Society, the International Institute for Strategic Studies, and the National Committee on U.S.-China Relations. Carter was elected a Fellow of the American Academy of Arts and Sciences.
Carter was also co-director of the Preventive Defense Project, which designs and promotes security policies aimed at preventing the emergence of major new threats to the United States.
From 1990 to 1993, Carter was director of the Center for Science and International Affairs at Harvard University’s John F. Kennedy School of Government, and Chairman of the Editorial Board of International Security. Previously, he held positions at the Massachusetts Institute of Technology, the Congressional Office of Technology Assessment, and Rockefeller University. (See David Rockefeller – Predatory Globalist)

He was a physics instructor at Oxford, a postdoctoral fellow at Rockefeller University and MIT, and an experimental research associate at Brookhaven and Fermilab National Laboratories.
Carter served as Assistant Secretary of Defense for International Security Policy during President Clinton’s first term.

Carter noted that China was a central economic partner and that ‘The Shift to Asia’ is principally an economic matter with new security implications. India, Australia, and New Zealand were mentioned as forthcoming security partners (AKA the TPP Agreement currently on the “fast track” for the Obama Admin. See: Obama’s TPP Negotiators Get Big Bonuses From Wall Street)
(DARPA) Carter had been a longtime member of the Defense Science Board and the Defense Policy Board, the principal advisory bodies to the Secretary of Defense. During the Bush administration, he was also a member of Secretary of State Condoleezza Rice‘s International Security Advisory Board
Carter’s views on Iran have been perceived as hawkish. In 2006, he authored a report advocating use or threat of force to prevent Iran from obtaining nuclear weapons for the Carnegie Endowment for International Peace. (Exposed by the Reese commission as an endowment for WAR)

Carter is certainly a man from Wall Street, and a long standing member of the Global Govt round tables. He shares a high level tech background with the recent Obama Nominee for AG, Loretta Lynch. (Also from Wall St. as well as the NY Federal Reserve. MORE on Ms Lynch HERE)
There seems to be a major preparation ongoing for some kind of Cyber War. This war to be blamed on set up enemies such as “ISIS”, Syria, and North Korea etc… Would be impossible to prove to the American Citizenry. We would have to “trust” the powers that be, that whatever occurred went down per the official story. The I – Patriot Act has already been written.
Ashton Carter has been up for nomination for past duties in the US Central Govt…. He has passed unanimously each time.

From my good friend Thomas Jefferson:

The Council on Foreign Relations website summarizes the recent Senate Investigation Report on the CIA. Senate staffers spent a half decade reviewing more than 6 million sensitive CIA documents to complete its study. Senator Dianne Feinstein says CIA stonewalling, not her committee, is to blame for the $40 million it cost to investigate the “enhanced interrogation techniques” used during the George W. Bush administration. 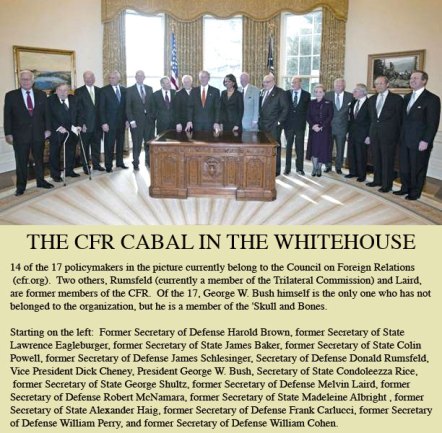 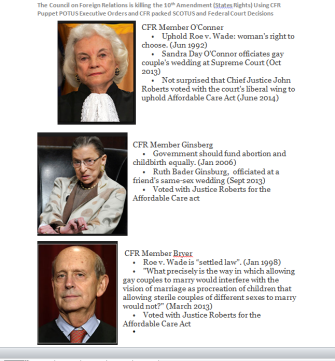 (The CFR has stacked the supreme Court )
By 2006, press disclosures, the unwillingness of other countries to host existing or new detention sites, and legal and oversight concerns had largely ended the CIA’s ability to operate clandestine detention facilities.
After detaining at least 113 individuals through 2004, the CFR run CIA brought only six additional detainees into its custody: four in 2005, one in 2006, and one in 2007. By March 2006, the program was operating in only one country. The CFR run CIA last used its enhanced interrogation techniques on November 8, 2007. The CFR run CIA did not hold any detainees after April 2008.
#20: The CIA’s Detention and Interrogation Program damaged the United States’ standing in the world, and resulted in other significant monetary and non-monetary costs. The CIA’s Detention and Interrogation Program created tensions with U.S. partners and allies, leading to formal demarches to the United States, and damaging and complicating bilateral intelligence relationships.
In one example, in June 2004, the secretary of state (CFR member Colin Powell Colin L. Powell Sec of State 2001-2005) ordered the U.S. ambassador in Country | to deliver a de marche to Country | “in essence demanding [Country | Government] provide full access to all [Country | detainees” to the International Committee of the Red Cross. At the time, however, the detainees Country | was holding included detainees being held in secret at the CIA’s behest.”
More broadly, the program caused immeasurable damage to the United States’ public standing, as well as to the United States’ longstanding global leadership on human rights in general and the prevention of torture in particular.
CIA records indicate that the CIA’s Detention and Interrogation Program cost well over $300 million in non-personnel costs. This included funding for the CFR run CIA to construct and maintain detention facilities, including two facilities costing nearly $| million that were never used, in part due to host country political concerns. To encourage governments to clandestinely host CFR run CIA detention sites, or to increase support for existing sites, the CFR run CIA provided millions of dollars in cash payments to foreign government officials. CFR run CIA Headquarters encouraged CFR run CIA Stations to construct “wish lists” of proposed financial assistance to “think big’ in terms of that assistance.

This could make one a believer in a conspiracy to commit murder on 9-11-2001.  Whether one chooses to believe this report or not is not irrelevant.  The crime was committed and who did it is still a question on everyone’s mind, especially now as Joe Biden threatens us with speeches about following ISIS to the Gates of Hell.  (Who the hell does he think he is? His son is sitting on the board of directors for a natural gas company named Burisma operating in eastern Ukraine.  His son will not be sent to the front lines with Joe the Plummer’s kids.)

Our entire foreign policy since 9-11-2001 has been about engaging in the Judeo-Christian-Muslim terrorist hoax (otherwise known as the “religious holy wars”), and this time ISIS has more advanced weaponry than Israel, and they are out of control, corporate toy soldiers, pirates, and mercenaries. 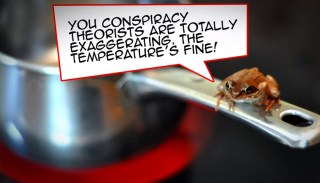 What’s important to realize is that many of us world citizens believe in following the law, and that’s precisely but not exclusively why we as a nation are so concerned about the cost of living, yet we do nothing about it until it’s too late.

Meanwhile, mind games like the one depicted in the short film below and sick and evil.  Their use of psychological warfare, chemical weapons, and media propaganda machines exposes their “soft power” as it was referred to many years ago.

Anyway, pay attention and keep digging.  Think about the best way to fight this power and make public suggestions online for all to see.

Hey, maybe it’s me.  I’m just noticing a random coincidence.  Right?  Look again.  Probably so.  Hindsight is 20/20.  Without seeing the original script and asking the directors, producers, and actors any questions, we cannot ascertain whether there was supposed to be any likeness to a future event.

If good ole Michael J Fox were to say to you “Hey Doc, I got to tell you something about the future.” Would you listen? 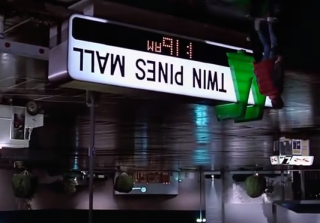 I guess I need to look into synchromysticism.  Looks like a bunch of random coincidences to me.