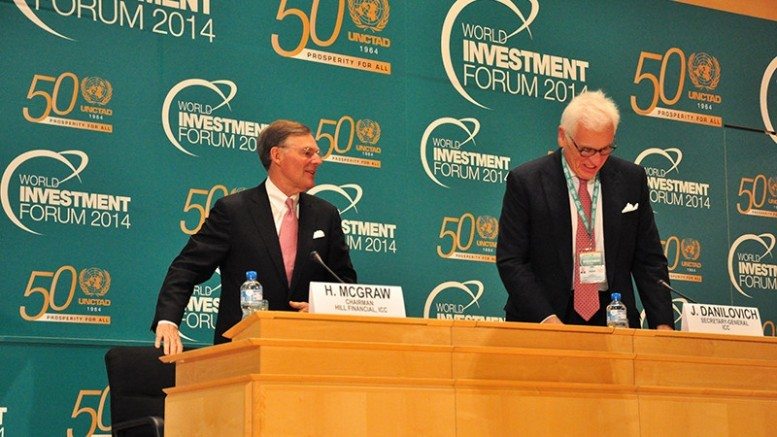 TN Note: The International Chamber of Commerce has 6.5 million members in 130 countries, and is highly influential in American Chambers of Commerce as well. The ICC is sold out to the 17 Sustainable Development Goals (SDGs) promoted by the UN’s 2030 Agenda that received the global stamp of approval last October. The ICC leadership may or may not understand the economic consequences of imposing Sustainable Development on the planet, but their collaboration penetrates deep into the business community everywhere.

The International Chamber of Commerce (ICC) and UNCTAD have pledged to strengthen their work maximizing the benefits of international trade and investment for economic and social development, and laid out plans for new collaborative efforts to advance the Sustainable Development Goals (SDGs) adopted by the United Nations General Assembly in September 2015.

“Both UNCTAD and ICC are strongly committed to implementing the United Nations 2030 Agenda for Sustainable Development and can collaborate in a number of important areas such as trade facilitation, e-commerce, investment and competition law,” Dr. Kituyi said. “The private sector will play a significant role in fulfilling the implementation of the SDGs and we are very pleased to partner with ICC, being the largest representative business organization in the world.”

ICC is the world’s largest business organization with a network of over 6.5 million members in more than 130 countries. ICC works to promote international trade, responsible business conduct and a global approach to regulation through a unique mix of advocacy and standard setting activities – including market-leading dispute resolution services. Members include many of the world’s largest companies, small and medium-sized enterprises (SMEs), business associations and chambers of commerce.

UNCTAD – the United Nations Conference on Trade and Development – was formed in 1964 to help poor countries adopt policies that would integrate them into the world economy and boost prosperity. UNCTAD is based at the United Nations Office at Geneva, Switzerland, and has representative offices at the United Nations in New York and in Addis Ababa, Ethiopia. It works at the behest of 194 member States and employs 500 people.